Syrocco Syrah du Morocco is made with 100% Syrah from vines that are 25 years old on average, vineyards all ploughed by hand and organically farmed. Aged in large older barrels. 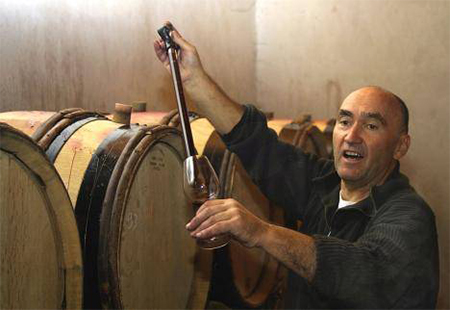 In France’s Northern Rhone Valley, there are few names as revered as Graillot. It was in 1985 that the now legendary Alain Graillot, who after working with the venerable Jacques Seysses at Domaine Dujac, came back to his home in Crozes-Hermitage to start his own domaine. With each passing year his devotion to the art of making hauntingly delicious Syrah from his organically farmed, stone-laden vineyards, has been rewarded with an ever growing and highly dedicated following around the world. Alain’s sons Maxime and Antoine have been in charge since 2008, with Alain working closely alongside them to this day. All the work is still completely the same as it ever was: hand-harvesting, organic farming, whole-cluster fermentation, and aging the wines primarily in 1-to-3 year old barrels purchased from some of the top estates in Burgundy. In great years, the domaine also makes tiny quantities of a barrel selection knows as “La Guiraude,” a rare and remarkably complex wine of particular distinction. The domaine’s status as one of the top domaines in all of France is without question and the whole lineup are must-haves for any serious Northern Rhone fan.

Syrocco is produced by legendary Rhône vigneron Alain Graillot and his sons, Maxime and Antoine. He stumbled upon these vineyards and the Thalvin winery while bicycling in the Zenata region of Morocco between Casablanca and Rabat. This gorgeous area is an organic dream, with cool winds blowing off the Atlantic and no polluting industries whatsoever. The Thalvin winery has been around since the 1920’s, and when Alain found their gorgeous property, he formed a partnership with them to provide Syrah and Cinsault vines for his own Moroccan wines. Alain crafts these two wines as a fruit-forward and juicy, yet they are made in an Old- World style with soft extraction, excellent balance, and complex aromatics. Practicing organic.

Thalvin-Alain Graillot Zenata Syrocco Syrah du Morocco is made with 100% Syrah from vines that are 25 years old on average, vineyards all ploughed by hand and organically farmed. Aged in large older barrels.